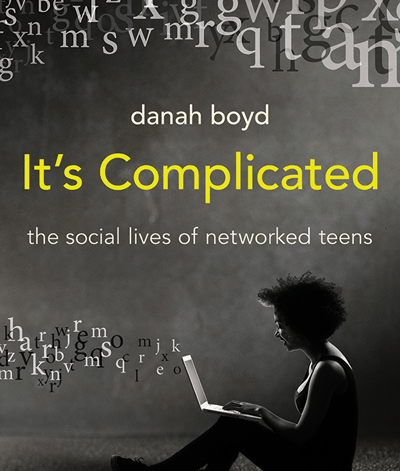 In her recent book “It’s Complicated,” social media researcher Danah Boyd examines the behavior of teenagers in the realm of online networking. Her primary goal is to answer the question: Why do teenagers behave so strangely online?

One of the primary themes of her study is the notion of “context collapse.” The phrase was coined to capture the sometimes overwhelming nature of social networking, and how different worlds collide on the internet. For example, maintaining a Facebook account requires managing school friends, work friends, neighbors, relatives, and any number of other circles. As a result, social networking tools often expose channels of communication that were never meant to be truly public.

To collect her data, Boyd spent years collecting data across states and demographics. Overall, the reality, according to Boyd, is that behavior has not really changed. Teenagers still grow up and change their tastes. What’s cool and isn’t cool still has an influence on how they act with one another. Social media serves as an escape from the stresses of everyday life. The difference now is that everything is visible, and the normal behavior of a teenager easily becomes misinterpreted.

One of Boyd’s examples regarding context confusion concerned a student out of Los Angeles. In a college admissions essay, the teen wrote a powerful piece about leaving gangs behind. However, his Myspace page was covered in gang references. Boyd points out that this teen isn’t trying to lie his way into school; rather, Myspace is his way of surviving in a culture that demands affiliation. For an outside adult, this out of context social media site may completely misrepresent the teen in question.

Boyd’s key takeaway? Context is everything, particularly in the world of social media.

Aaron Schecter is a PhD candidate in Northwestern’s Industrial Engineering and Management Sciences Department. He can be reached at aaronschecter2016@u.northwestern.edu.